Background: As the incidence of reverse shoulder arthroplasty (RSA) increases, so will the revision burden. At times, the revision surgeon may be faced with a well-fixed component on one side of the joint and revision implants from a different manufacturer. The ability to use glenoid and humeral implants from different manufacturers could simplify the revision procedure. This study hypothesized that across a range of RSA systems, some implants would demonstrate high size compatibility and others would demonstrate low compatibility.
Materials and Methods: Six polyethylene inserts each from eight reverse total shoulder arthroplasty systems were examined (48 total inserts). All inserts were scanned using a laboratory micro-computed tomography scanner at 50 μm isotropic voxel spacing, and their surface geometries were reconstructed. The different implant geometries were co-registered, and the three-dimensional (3D) variability between the articular surfaces of the different implant systems was measured. Intrasystem manufacturing variability was also determined by measuring the 3D variability of inserts from the same system.
Results: The intersystem polyethylene articular surface deviations between same-size systems were not significantly different (P = 0.61) and were a mean maximum of 60 ± 16 μm (range: 30-80 μm). Intrasystem manufacturing variability was equivalent between all but two models, averaging 49 ± 17 μm (range: 23-99 μm).
Discussion: Differences in articular geometry between same-size inserts from different systems were on the same scale as intrasystem manufacturing variability, suggesting that different implant systems of the same nominal diameter could potentially be used interchangeably in revision or extenuating circumstances.
Conclusion: The results of this study suggest that surgeons can theoretically interchange same-sized implant components from the different RSA systems tested when conducting revisions.

Reverse shoulder replacement surgery is increasing in prevalence due to the advent of better performing, longer lasting implant designs. [1] Even with these improvements, the burden of revision surgery is inevitable, as implants become infected, loosen, or wear. [1],[2],[3] Day et al. [4] have previously described the growth in upper extremity arthroplasty procedure rates at 7-13% per year, much higher than primary and revision knee arthroplasty (6% and 7%, respectively), and primary and revision hip arthroplasty (4.5% and 2.5%, respectively). Notably, they highlight the rapidly growing revision burden for the upper extremity, a concern due to the more complex nature of revision procedures.

One challenge that may face the revision surgeon is when one side of the joint is well-fixed, for example, a well-ingrown glenoid component and a loose humeral component. Intraoperatively, circumstances can arise where the revising surgeon does not have access to a full range of implants from the required manufacturers. Therefore, they may have to remove a well-fixed component to ensure both sides of the bearing couple are from the same implant system or replace only the loose component and mix between implant systems and potential manufacturers. Due to the sphere-in-a-cup nature of reverse shoulder implants, some manufacturers and surgeons anecdotally suggest that this type of system mixing is allowable. However, to the authors’ knowledge, the true compatibility between different reverse shoulder arthroplasty (RSA) systems has not been studied. Therefore, the primary objective of this study was to determine the intersystem geometric variability between similar-sized implants from different RSA systems. As a secondary objective, the intrasystem manufacturing variability between polyethylene inserts of the same system was also determined, as this could affect the accuracy of the intersystem measurements. It was hypothesized that across the range of systems, some implants would demonstrate high compatibility and others would demonstrate low compatibility.

The polyethylene inserts for eight different RSA implant systems were obtained from six manufacturers [Table 1]. For each implant system, six polyethylene inserts of the same size were obtained, either from the same or different manufacturing lots. In all cases, the smallest available diameter of the insert was acquired. For six of the implant designs, the manufacturers reported diameter was 36 mm, and for the remaining two designs, the diameter was reported to be 38 mm.

Table 1: List of implant manufacturer, system and sizes evaluated in this study

All 48 polyethylene inserts were scanned with a laboratory microcomputed tomography scanner, using a validated protocol that has been widely utilized to study the polyethylene components from hip and knee arthroplasty. [5],[6] The scans were performed with an isotropic voxel spacing of 50 μm, and X-ray energy of 90 kVp and 40 mA. There were 1200 views acquired per scan, with 10 acquisitions averaged per view to reduce noise. The insert geometries were extracted from the reconstructed scan volumes using isosurface rendering, at the highest surface quality settings, and saved in stereolithography format for further evaluation [Figure 1]a-h]. 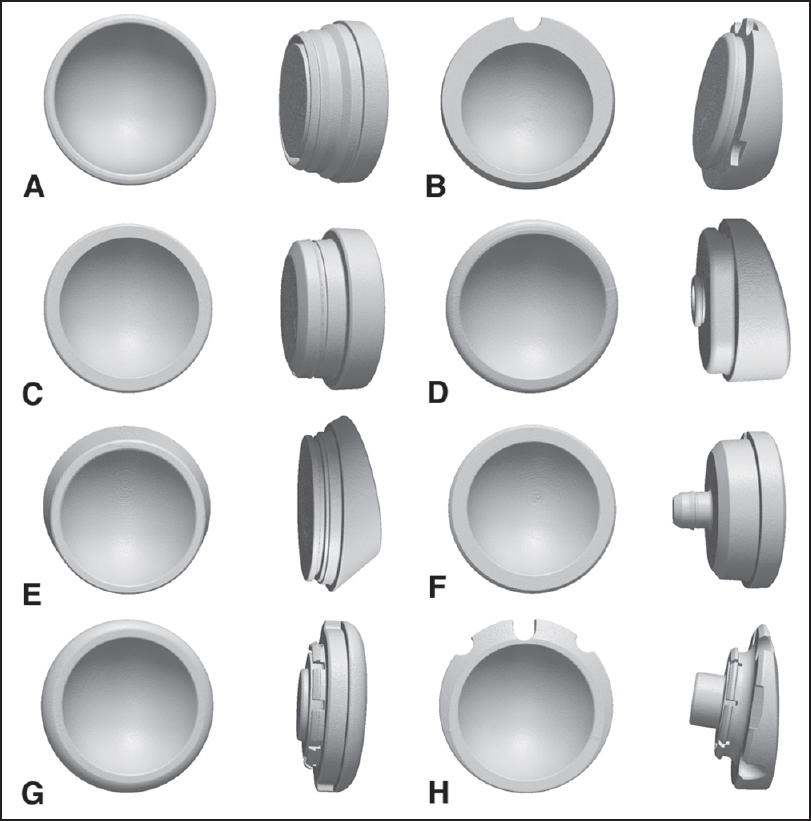 The analysis process is shown visually in [Figure 2]. One insert surface geometry for each of the eight different implant systems was imported into polygonal geometry editing software (Geomagic Studio, 3D Systems Inc., Cary, NC, USA). The articular surface of each insert was isolated and extracted from each geometry. This particular geometry, for each model, was then imported into dimensioning software (Geomagic Qualify, 3D Systems Inc., Cary, NC, USA). [7] Three-dimensional (3D) comparisons were then made between the six 36 mm diameter inserts and the two 38 mm diameter inserts. Intersystem comparisons were conducted by co-registering two inserts at a time, using an iterative closest points algorithm to determine the best fit between the two articular surface geometries. Once registered, the 3D deviations between the two surfaces were calculated and mapped across the entire surface using the dimensioning software. The maximum absolute deviation (either positive or negative) between the two surfaces was computationally determined from the deviation maps.

Figure 2: Visual representation of the steps performed by analyzing the articular surface variability between systems

Intrasystem manufacturing variability was determined by comparing the six scanned inserts for each implant system. The six geometries from each model were co-registered, and the deviations between them mapped, using a custom software utility. [8] This software, previously validated, functions in a similar manner to the software used to compare the geometric compatibility of the different models, but can better handle larger files and perform comparisons across more than two geometries. From each deviation map (which displayed the average deviation across the six geometries), regions of interest were selected from the articular surface, the rim, and the backside surface, where the maximum amount of deviation was visualized within those structures. From within each region of interest, the maximum deviation was recorded.

Descriptive statistics (mean, standard deviation, and range) were calculated for the maximum intersystem surface deviation and the intrasystem manufacturing variability. Differences between implants and regions of interest were compared using a one-way ANOVA with Tukey post hoc test. Statistical significance was set for when P < 0.05.

Figure 3: The measured deviations from the polyethylene inserts tested. (a) The deviation in micrometers between the articular surfaces of the different reverse shoulder arthroplasty systems. (note that the Depuy and Exactech inserts were the only 38 mm models, so represent a single comparison). (b) The intrasystem manufacturing variability for the different reverse shoulder arthroplasty systems tested 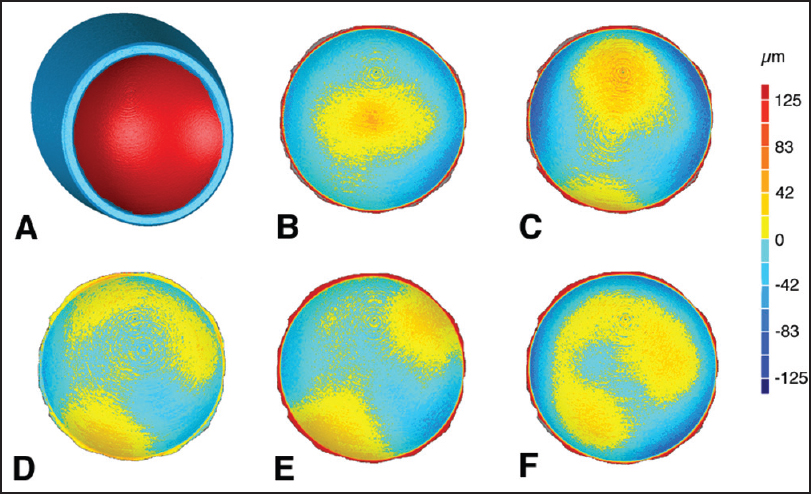 Figure 4: Exemplar articular deviation maps, with the torner flex shoulder system reverse insert used as the reference model compared to the 36 mm diameter polyethylene inserts from the other models and manufacturers. (a) Intact tornier aequalis reversed insert geometry with the articular surface that was isolated for comparison highlighted in red, (b) Arthrex, (c) Biomet, (d) Tornier flex shoulder system reverse, (e) Zimmer anatomical shoulder inverse/reverse, (f) Zimmer trabecular metal reverse shoulder. Registrations were centered at the base of the geometry, where the glenosphere would make contact with the polyethylene insert

The average maximum deviation between different inserts from the same system (i.e., intrasystem manufacturing variability) ranged from 30 ± 6 μm with the Depuy Delta Xtend Reverse to 71 ± 24 μm with the Biomet Comprehensive Reverse [Figure 3]b]. The only significant difference (i.e., one system having significantly higher manufacturing variability) was between the Depuy and Biomet systems (P = 0.03), with all other systems demonstrating the same magnitude of intrasystem manufacturing variability. The overall mean of the deviations, across all systems, was 49 ± 17 μm, with a range of 23-99 μm. There was no difference (P = 0.38) in deviation magnitude based on the location of the measurement (articular surface, rim, or backside surface).

The articular surfaces of the same-sized polyethylene inserts from the 8 RSA systems tested in this study were found to be highly compatible. The magnitude of deviations between implant models was on average 60 μm, roughly the thickness of a strand of human hair, and there was no appreciable pattern to the deviations. This is likely due to the hemispherical nature that all systems implement, for articulation with the round glenosphere. Although it is not the purpose of this paper to make surgical recommendations, similarly sized humeral inserts from the different implant systems tested in this study could theoretically be interchanged. In certain circumstances, this could reduce the complexity and the associated complications of revising a well-fixed implant, which could potentially benefit the patient. Each case would clearly need to be closely examined for fit intraoperatively. Individual manufacturers have generally not publicly reported on manufacturing tolerances. Such data in the orthopedic literature have been for applications in which geometric accuracy is a requirement, including wear measurements in retrieved implants [8],[9] and radiographic motion tracking in radiostereometric analysis or fluoroscopy. [10] Previous studies have reported the manufacturing variability for polyethylene inserts used in total knee replacement to be on the order of tens of microns, similar to the findings of this study for reverse shoulder inserts (52 ± 17 μm). [9] This intrasystem manufacturing variability is likewise on the same order of magnitude as the geometric variability between inserts of different systems (60 ± 16 μm). Therefore, the geometric variability between the articular surfaces of different implant systems is equivalent to the manufacturing variability of those same implants. These observed tolerances are also relevant to researchers who will undertake retrieval studies of failed reverse shoulder implants, by establishing the measurement uncertainty for estimating the unworn implant geometry.

Limitations of this study are that only a single size of polyethylene insert (the smallest) was studied from each system, and not all implant models or manufacturers were included in the study. However, it seems likely that the results would be applicable to other polyethylene insert sizes within the systems studied. The focus of this study was the articular surface, which is the most important aspect of interdesign compatibility. However, many of the implant systems have different rim geometries [Figure 1], which are an additional variable and could potentially have an effect on edge wear and impingement. The glenospheres offered by different manufacturers were also not examined, however by their inherent nature the variation between their articular surfaces, as was found with the polyethylene inserts, is likely to be similar. Our method to directly examine the entire articular surface is more thorough than simply measuring the diameter of liners from different manufacturers, which would reveal whether the difference in diameter (if any) was consistent throughout the entire geometry. In the case of a slightly narrower liner articulating against a slightly broader glenosphere, the curvature of the glenosphere should still enable bearing contact, but with reduced surface area coverage. In the reverse case of a broader liner and a narrower glenosphere, there would be greater penetration of the glenosphere providing increased surface area coverage.

The articular surfaces of similarly sized polyethylene inserts used in RSA systems examined in this study were found to be equivalent, with a mean intersystem variability of 60 ± 16 μm. This variability is on the same order of magnitude as the intrasystem manufacturing variability of these polyethylene inserts, which was 52 ± 17 μm. Although it is not the purpose of this paper to make surgical recommendations, our findings suggest that revision surgeons can theoretically interchange same-sized implant components from the different RSA systems tested, when faced with a well-fixed implant on one side and no way to implant a new component from that same system on the opposite member of the bearing couple.

The authors would like to acknowledge Arthrex, Biomet, Depuy-synthes, Exactech, Tornier, and Zimmer for implant donations.

There are no conflicts of interest.