We present a case of distal clavicle osteolysis following treatment of a chronic acromioclavicular joint dislocation with a synthetic ligament. The relevant literature is reviewed and discussed.

The synthetic ligament, Nottingham Surgilig (Surgicraft, UK), was introduced in 2001 by the Nottingham shoulder unit as a method of addressing failed acromio-clavicular joint (ACJ) surgery. [1] The artificial braided polyester ligament was developed with a purpose designed loop at each end to facilitate insertion and fixation. The synthetic ligament is looped around the coracoid process, threaded itself, then passed through around the posterior aspect of the clavicle and anchored with a cortical screw, a technique which is quick and requires only two specialized instruments to perform. [2] The braided polyester material provides strong biocompatible fixation that develops good tissue in-growth and provides sufficient stability to allow early shoulder mobilization postoperatively. [2] The synthetic ligament has gained popularity over the last three years as a primary method of stabilization in Rockwood classification [3] types III-V injuries and is also suitable for use in distal clavicle fractures.

A 56-year-old lady presented to shoulder clinic with a one-year history of pain over her left dominant acromioclavicular joint. Her pain originated following a fall onto her shoulder having been knocked off of a pushbike during a collision with a motor vehicle. The primary complaint was of pain, making the patient’s work as a machinist difficult. She also complained of a visible but subtle deformity of her acromioclavicular joint resulting in problems keeping the strap of her bra in place.

Clinical examination in the outpatient clinic revealed an obvious acromioclavicular joint dislocation with palpable crepitus on reduction, dynamic instability on clinical testing, and painful movements above 90 degrees of forward flexion and abduction. Radiographs confirmed a diagnosis of grade II ACJ dislocation [Figure 1]a. As she presented with a symptomatic shoulder, she was counseled for an elective ACJ reconstruction. This was a chronic ACJ dislocation and the indication for operation was pain with dynamic instability on clinical examination. At operation, she underwent an uncomplicated ACJ reconstruction using the synthetic ligament technique. Bone quality appeared normal intraoperatively and a chronic grade III injury was noted at time of operation in contrast to the preoperative imaging. Immediate postoperative radiographs were entirely satisfactory. 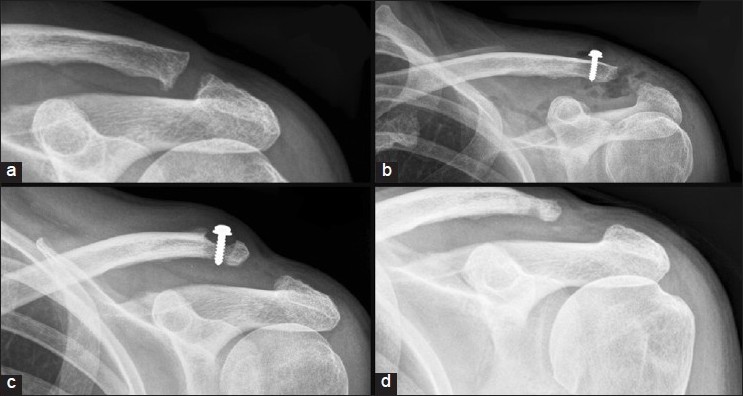 First follow-up appointment at 2 weeks postoperatively demonstrated no obvious clinical concerns, good wound healing, and no signs of infection or of failure of reconstruction. For the first six weeks postoperative, she undertook passive shoulder exercises under the supervision of the physiotherapists with movement restricted to less than 90 degrees of forward elevation and abduction. At six weeks, this was increased to active range of movement exercises. Follow-up appointment at six weeks revealed no clinical problems and her preoperative symptoms had completely settled.

At 3-month follow-up, the patient reported a firm, painful lump that had developed in the region of the screw. On examination, there was no evidence of fluctuance or erythema, but the swelling was tender to touch. Radiographs demonstrated adequate positioning of the screw with no migration but possible evidence of osteolysis of the surrounding bone [Figure 1]b. The ACJ had however remained reduced with the reconstruction appearing to be intact. At this point, hematological and biochemical inflammatory markers were as follows: WCC 4.9, CRP 2.9, and ESR 6.

At 5-month follow-up, pain and swelling continued to be significant and radiographs demonstrated significant osteolysis around the screw [Figure 1]c. It was thought that the patient was at risk of developing periprosthetic fracture and was listed for urgent removal of the synthetic ligament and screw.

The synthetic ligament and screw were removed six months after their insertion. Moderate tissue in-growth was noted. Perioperatively, there was no evidence of macroscopic infection and this was confirmed on cultures of intraoperative samples. Two weeks post removal of implants, wounds had healed with no evidence of infection and the patient reported a significant improvement in her symptoms of pain. Postoperative inflammatory markers were as follows: WCC 7.9, CRP 2.0, and ESR 7.

Two months following removal of the synthetic ligament, the subtle deformity at time of presentation was noted to have recurred and the patient was again complaining of pain and difficulty working overhead. Radiographs demonstrate displacement of the lateral end of clavicle, but no evidence of further progression of osteolysis [Figure 1]d. A widened acromioclavicular distance is also noted.

She is currently on a waiting list for ACJ reconstruction salvage surgery.

Reduction of the ACJ and fixation of acromion and/or coracoid to the clavicle was described by Delbet in 1919 using silver wire [9] and has since evolved to use implants such as screws, [10] Kirschner-wires, [11],[12] or variations of a distal clavicle hook plate. [13],[14]

Coracoclavicular ligament reconstruction using a prosthetic surgical sling have gained great popularity of late due to ease of surgical technique, strength and longevity of surgical implant, and the ability to preserve surrounding anatomical structures giving a better functional result. Materials such as Ethibond [22] or polydioxanone suture (PDS) suture, [23] Gore-TEX, [24] Dacron [25] or braided polyester synthetic ligament such as the “Nottingham Surgilig” [4] have been explored with varying degrees of success and complication.

Surgical polyester products similar to the material used in the synthetic ligament has been used in a number of surgical procedures such as vascular grafts/patches, [26] mesh in hernia repair, [27] and in synthetic reconstruction of anterior cruciate ligament. [28]

Reports of foreign body reaction leading to osteolysis became common following the use of polyester synthetic graft material in the reconstruction of anterior cruciate ligaments and lead to suggested limitations to their use in normal healthy individuals. [28]

To the best of the authors’ knowledge, this is the first report of a sterile foreign body reaction to the polyester material in the synthetic ligament causing osteolysis. The case reported demonstrated negative bacteriology on several occasions and low inflammatory markers which, with the clinical examination of the patient as a correlate, suggest a low level of suspicion of an infective cause. The fact that the patient remained symptomatic even after the removal of the surgical implants further supports this. Our patient was a non-smoker and followed postoperative physiotherapy instruction carefully.

This case also highlights that clinical examination is as important as radiographic imaging. In this case, the imaging suggested a grade II injury; however, clinical examination demonstrated dynamic instability of the ACJ in keeping with the patient’s symptoms and difficulty with work and overhead activities. Rolf et al. have noted in a series of patients treated surgically for ACJ dislocation; 55% of patients with radiographic diagnosis of grade III injuries were found to have grade IV or V injuries at time of surgery. [8]

It is unlikely that screw toggle caused the bone loss in this case, because throughout the investigation of this episode, the radiographic evidence demonstrated the screw to be firmly fixed within the distal clavicle, consistent with the intraoperative findings at the explant stage. We postulate that the osteolysis occurred at the clavicle and not at the coracoid because the clavicular cortex was breached by the screw hole allowing osteolysis around the screw.

Similar anecdotal evidence of aseptic foreign body reactions following ACJ reconstruction, causing periosteal reactions or osteolysis, has been reported. So far, these cases have involved the use of PDS coracoclavicular slings, [29] Gore-Tex graft, [30] and Dacron. [31] Osteolysis of the distal clavicle following ACJ dislocation surgery with similar products suggests the need for further evaluation of the products currently in use to ensure that this is not a more common occurrence than previously anticipated.

Salvage procedures for failed ACJ reconstruction have previously included the use of the synthetic ligament, which in this case would obviously not be appropriate. A simple salvage by performing a distal clavicle osteotomy such as the Mumford procedure may be an option. [32] In this case, however, the Mumford procedure may not be of benefit due to the already widened acromioclavicular distance. Modifications of the Weaver-Dunn technique, which involve a distal clavicle osteotomy as part of the technique prior to reduction, may be appropriate.

Although synthetic ligaments can provide stable fixation and is not technically demanding, our case demonstrates that osteolysis is a possible complication of unknown incidence. Bone loss due to osteolysis can make salvage challenging.