Abstract
Background: Injuries to the posterior labrum are less common and more difficult to diagnose compared to anterior labral pathology. This may be in part due to difficulties in preoperative diagnosis. Posterior labral injuries cause abnormal loading of the rotator cuff with subsequent weakness. Examination using the O’Briens test tightens the posterior capsule and posteriorly translates the humeral head, stressing the labrum resulting in pain and weakness.
Method: A retrospective study.
Results: Of 74 patients diagnosed with a posterior labral tear at arthroscopy 55 had subjective weakness on performing a O’Briens test, a sensitivity of 83% and a positive predictive value (PPV) of 90%.
Conclusion: Multiple tests have been described for posterior labral pathology and none of these, on their own, have a high sensitivity rate. Posterior labral injuries can often be missed on magnetic resonance imaging scanning and also at surgery if not specifically looked for. Using a sign of clinically demonstrated weakness when performing the O’Briens test, and hence reinterpretation of the test, is sensitive, with a high PPV for posterior labral pathology and can help guide further treatment.

Injuries to the posterior labrum are much less common, and less frequently diagnosed as compared to their anterior counterparts. [1] This may to some degree be due incidence, approximately 5%, but may also reflect the difficulty in preoperative diagnosis. [2] Numerous clinical tests have been described in the diagnosis of posterior labral tears and instability with varying degrees of sensitivity and specificity. [3] These include the Kim test, the Jerk test, posterior stress test, load and shift test, and the O’Brien’s test. [1],[4],[5],[6],[7] The latter test was initially described in relation to acromioclavicular joint pathology and superior labral anterior and posterior (SLAP) lesions, with a positive test being ascribed to the initial presence then absence of pain during testing. [7] Patients who present with a painful shoulder and the added component of weakness could be incorrectly diagnosed as having a cuff tear. It is proposed that if the O’Briens test is used to subjectively test isometric strength it may be a sensitive test in the diagnosis of a posterior labral tear.

Between March 2010 and June 2013, 74 nonconsecutive patients who presented to the senior author (LF) were included in the study. All were prospectively examined, and their data entered into a database prior to undergoing arthroscopic examination and procedure. A retrospective case-controlled study was done on these data correlating the examination reference and the findings at shoulder arthroscopy.

Data were collected with the consent of all patients and recorded using a patient management data system; patient confidentiality was maintained in all cases. For inclusion in the case controlled study criteria, requirements were: No prior surgery, over 16 years of age, and suspected posterior labral injury requiring arthroscopic stabilization. The entire sample received verification using the same reference standard, the O’Briens test, which was performed as part of their clinical examination prior to surgery.

This test was conducted in a similar manner to that initially described by O’Brien. [7] The patient was asked to forward flex the affected arm 90° with the elbow in full extension. The patient then adducted the arm 10° to 15° medial to the sagittal plane of the body. The arm was internally rotated so that the thumb pointed downward. The examiner then applied a moderate downward force to the arm being resisted by the patient.

The test was considered positive with objective weakness observed by the examiner when a moderate downward force on the arm resulted in loss of forward flexion from 90° [Figure 1]. The results of the O’Briens test were interpreted prior to the criterion standard of arthroscopic examination and then correlated to the intraoperative findings. 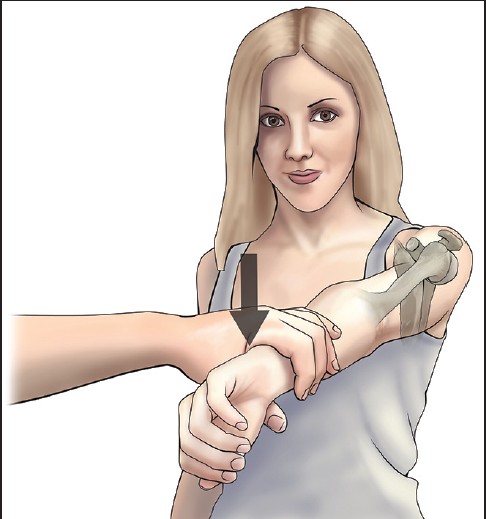 Figure 1: During O’Brien’s test the posterior capsule is tight with anterior laxity and the line of pull of the deltoid during the test translates the humeral head posteriorly

Sensitivity, specificity, positive predictive values (PPVs), and negative predictive values (NPVs) were determined using a 2 × 2 table. Analysis of findings of the O’Briens test and correlation with the arthroscopic examination was then done to determine the sensitivity, specificity, and positive and NPVs of the test with respect to the diagnosis of posterior labral injury.

Seventy-four patients (69 male and 5 female) with and the average age of 25.82 years (STD = 7.89 years) fulfilled the inclusion criteria. The average number of days between the reference standard test, the O’Briens test, and the index standard, the arthroscopic examination, was 80.21 days. [Table 1] shows the correlated results between the arthroscopic findings and the O’Briens test with subsequent calculation of respective sensitivity (83%), specificity (25%), PPV (90%) and NPV (15%). On further examination of the subgroup of patients who did not have a posterior labral tear on arthroscopy, there is a trend toward finding that these patients had a combination of multidirectional instability, lax posterior capsules, or attenuated labrum [Table 2].

Table 2: Patients in whom no labral tear was found at arthroscopy regardless of whether the O’Briens test was positive or negative (n = 8)

The original description of the O’Briens test was in reference to the diagnosis of SLAP lesions, with this series showing a 100% sensitivity and 98% specificity for detecting a SLAP tear. [7] However, subsequent work has questioned the sensitivity and specificity of O’Briens test in detection of SLAP injuries. [8] The test is deemed positive on two criteria; first, pain is elicited in a forward flexed internally rotated position, and second, this is relieved in the externally rotated position.

[7] The pain is thought to originate from tension in an abnormal biceps complex origin. Weakness was not considered in the interpretation of the test. In a recent study, it has been shown that during the O’Brien’s test the posterior capsule is tight with anterior laxity and the line of pull of the deltoid during the test translates the humeral head posteriorly. The result is an increase in contact pressure along the postero-superior glenoid with both an intact labrum and when a SLAP lesion present.

[9] We suggest that in doing so, in the presence of an unstable posterior labrum, the patient experiences instability of the joint, discomfort, and secondary weakness. In addition, the humeral head translates posteriorly in this adducted, flexed, and internally rotated position. This leads to cuff muscle dysfunction during flex against resistance in this position leading to weakness and an inability to maintain the test position.

The results of this study suggest this reinterpretation of the O’Briens test to be sensitive (83%) to and highly predictive (90%) of posterior labral injury, thereby allowing the clinician to rule out the diagnosis more confidently in a negative test. Unfortunately, the specificity is low (25%), influenced by the negative test results. Further examination of the cases which were negative with the reference standard and comparison with arthroscopic findings show that in the majority of cases, there were either multidirectional instabilities, lax glenohumeral capsules or attenuated labrums.

Limitations in the study are that it is a retrospective case-controlled study with selection bias in that only those thought to have a posterior labral problem underwent arthroscopy. A prospective study with a suitable control group would further investigate both the sensitivity and specificity, and verify the robustness of the O’Briens test as a screening test for posterior labral injuries.